Some 5,500 people were affected by the disaster, according to the BNPB. Three more pyroclastic flows occurred on Sunday, with the third taking place at 10 a.m. at a much smaller scale than the previous ones.

The BNPB has identified nine of the known victims. The five others are being held in Bhayangkara Hospital in Lumajang, and the causes of death remain unclear.

At least 35 people were seriously injured in the disaster, mostly suffering from burns. Two local hospitals and a handful of community health centers (Puskesmas) are treating the wounded.

The BNPB evacuated some 1,300 people from the affected areas. Nine others are known to be missing. At the time of writing, most of the evacuees were taking shelter in village centers in Candipuro, one of the two affected districts in Lumajang.

A group of miners, previously thought to have been trapped following the eruption, have also been evacuated.

A volcanic mudflow from the eruption destroyed a bridge over the Besuk Sat river, one of the four rivers around Mt. Semeru, cutting off a principal means of access to Lumajang and neighboring Malang.

Some 112 electricity substations operated by state-owned electricity company PLN were also destroyed. PLN East Java distribution general manager Adi Priyanto said on Saturday that while 30 substations had been recovered, the rest remained inaccessible as a result of the bridge collapse.

Suharyanto said the agency had begun mobilizing Rp 1.1 billion (US$75,726) worth of disaster relief supplies, including more than 1,300 packets of ready-to-eat meals, 2,000 blankets, 900 mattresses and two emergency tents.

"We are here to make sure the disaster relief efforts, particularly the evacuation, can be carried out quickly and smoothly and, of course, to ensure that the basic needs of the evacuees are met," Suharyanto said on Sunday.

President Joko "Jokowi" Widodo, through State Secretary Pratikno, expressed his condolences for the victims of the disaster. Pratikno said Jokowi had called for the BNPB, the National Search and Rescue Agency (Ba-sarnas), the police, the Indonesian Military (TNI) and a number of ministries to help deliver aid to Lumajang as soon as possible.

"The President has also called for [problems surrounding] health services, logistical supplies and the basic needs of refugees, as well as infrastructure repair, to be resolved as soon as possible," Pratikno said.

Many people living on the slopes of Mt. Semeru had experienced its volcanic activity before. But the sudden eruption on Saturday caught them by surprise, sending thousands fleeing its path of destruction and forcing hundreds of families into makeshift shelters.

"I didn't realize it was the sound of the eruption. I thought it was thunder because it was about to rain," Nathalia, a 36-year-old resident of Candipuro, said on Sunday.

The volcano's alert level remains unchanged since it was raised to waspada (advisory), the third-highest level in the four-tiered alert system, in May 2012.

But the Center for Volcanology and Geological Hazard Mitigation (PVMBG) said the volcano observatory in Semeru had warned residents on Thursday, two days before the eruption, about the potential for more pyroclastic clouds after a preliminary one appeared on Wednesday.

Residents, visitors and climbers have been advised to remain 1 kilometer away the crater in general and 5 km away from the crater in the south-southeast direction. PVMBG has warned about the continuing potential for lava flows, as well as volcanic mudflows along the four rivers descending from the mountain, especially during rain. 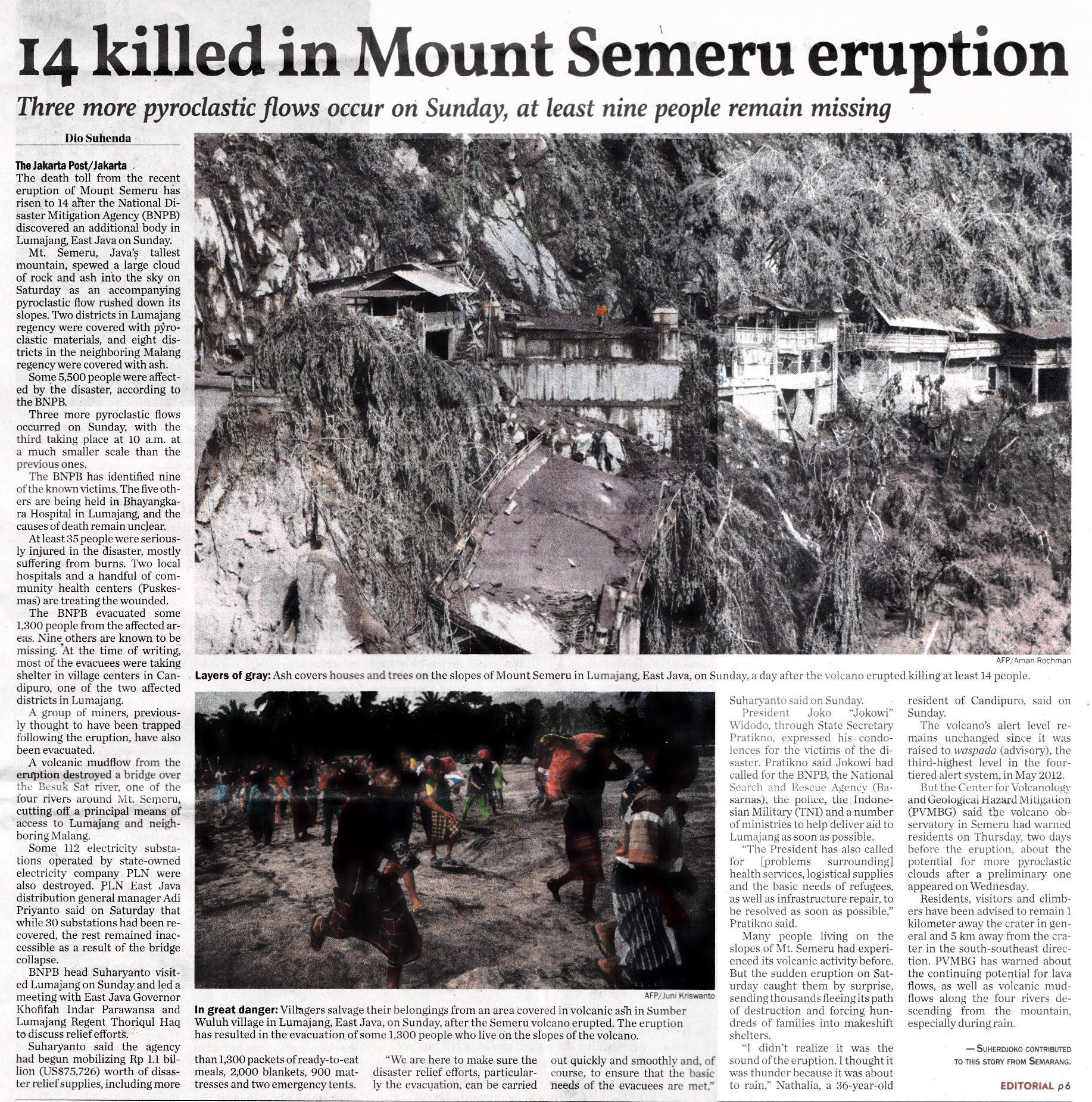